Download PDF
Use of ortholog screens helps to minimize a potential source of failure for preclinical candidates optimized against human GPCR targets. Incorporation of ortholog screens early in hit series evaluation can provide valuable insights for lead optimization. Multispan’s panel of GPCR orthologs can enable critical assessment of species-specific variations in target binding activity and modulation of GPCR signaling that could impact in vivo efficacy in small and large animal models.
Introduction

Demonstration of compound efficacy in small and large animal models of GPCR modulation remains a significant hurdle in the progression of preclinical candidates across a wide spectrum of indications of pharmaceutical interest. In addition to the challenges of optimizing pharmacology and toxicity, developers must translate results based on the screening of human GPCR targets into rodents and other model animals. In these model species, the structure of the receptor, its response to allosteric modulators and biases to signaling pathways and downstream effectors may not be fully conserved. Lead generation campaigns will obviously seek to prioritize hit series that impact therapeutically relevant pathways in both humans and model species while understanding the effects of ortholog sequence variations on activity. 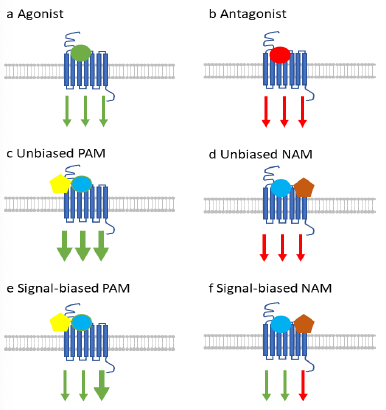 Figure 1 Major therapeutic mechanisms of GPCR-signal modulation. Modulators may be orthosteric (at the natural ligand binding site, panels a and b) or allosteric (at a distal site, panels c-f) Changes in downstream signaling may be positive (green) or negative (red), Biased signals may be limited to changes in one or more pathways (panels e and f).

To meet this challenge, Multispan has assembled a panel of human GPCRs and their small and large animal orthologs. In this article, we discuss how integrating ortholog screens into lead generation campaigns can both provide invaluable insights into compound profiles to aid in prioritization and help avoid failures in animal efficacy models.
The importance of ortholog screening in the development of next generation GPCR modulators

GPCR-targeted therapies currently account for 34% of approved drugs and as GPCRs continue to be studied, de-orphanized and clinically validated, the number of potential druggable targets and range of clinical indications will continue to expand1. As a result, there is optimism that improved understanding of GPCR biology and downstream signaling can be exploited to create a new generation of targeted therapeutics with improved selectivity, specificity, and side effect profiles.

There are multiple ways in which therapeutics may modify GPCR function (Figure 1), and their successful design therefore relies heavily on conservation of receptor structure and function between humans and model animals. In addition to classical competitive orthosteric agonists or antagonists (Figure 1 Panel a and b), GPCR signaling activity may also be modified agonistically or antagonistically by allosteric modulators (AM) that bind at sites distinct from the natural (orthosteric) ligand (Figure 1 Panel c and d). Furthermore, downstream signaling can be biased to one pathway or another by a given ligand. Both positive (PAM) and negative allosteric modulators (NAM) can also bias signaling through downstream pathways2,3 (Figure 1 Panel e and f). As a class, PAM and NAM currently comprise 7% of GPCR-targeted therapeutics in development (PMID) but as they should offer improved selectivity, specificity, and side effect profiles (PMID) over orthosteric drugs, this fraction is likely to grow.

Successful exploitation of the therapeutic possibilities of GPCRs depends on the ability of lead generation teams to screen and profile candidates in therapeutically relevant in vitro screens4. Translation of in vitro results into efficacy studies in model species obviously introduces additional challenges even when pharmacology and toxicology are set aside. The corresponding GPCR ortholog may be poorly conserved, either at the orthosteric site, in regions involved in allosteric modulation in the human ortholog or even differentially biased to signal through different downstream pathways. As a result, the biological activity of potential modulators may not be well conserved between species, and this will impact their viability in preclinical models. It follows that understanding of GPCR ortholog signaling in the test species and compound evaluation across orthologs during lead generation are essential steps in preclinical candidate profiling.

To address this challenge, Multispan has created a panel of cell-based assays (Table 1) for clinically validated GPCR orthologs of human and small and large animals. Figure 2 suggests a typical screen-to-lead approach and emphasizes how ortholog screens fully embedded in lead generation programs can reduce translational uncertainty.

In addition to providing preliminary data on potential efficacy across species, ortholog screens included at or immediately downstream of primary screening may be useful in prioritizing human hit series and inform structure-based lead design if this is available. During lead generation, ortholog assays add an additional dimension in the analysis of structure-activity relationships and the selection of leads. Meanwhile, human counterscreens may use a subset of receptors structurally or functionally related to the target or a multiclass panel such as the Multiscreen-231™

Efforts to develop agonists of GPR43 provide a clear example of the translational challenges outlined above. GPR43 (also known as Free Fatty Acid Receptor-2 (FFAR2) is stimulated by short-chain fatty acid (SCFA) ligands and is involved in multiple roles in inflammation, metabolism and the immune system5. In the intestinal epithelium, it is implicated in mediating the relationship between the gut microbiota and innate immunity.

A substantial body of evidence6 suggests that SCFA-stimulated GPR43 signaling plays a complex role in dysregulation of gut inflammation in ulcerative colitis and Crohn’s disease (collectively referred to as inflammatory bowel disease, (IBD). Both agonists and antagonists of GPR43 have been investigated as selective antiflammatories in these indications7. Rat and murine orthologs of GPR43 are ~80% conserved relative to human. Commercial and academic discovery campaigns6,8. have identified both orthosteric and allosteric agonists and antagonists which are selective for the human ortholog and with reduced potency against the murine and rat receptors. In one study, only one of two potent allosteric agonists developed against the human ortholog showed any activity in a murine efficacy model9.

In the case of MRGPRX2, a human GPCR involved in non-IgE mediated mast cell responses10, the murine (MrgprB2) and rat orthologs of have only 63% and 61% homology respectively with the human ortholog. Accordingly, MRGPRX2 and MrgprB2 respond differently to model agonists. The EC50 values (concentration required to give 50% response) of most ligands for MrgprB2 are significantly higher than those for MRGPRX211. This example of low sequence homology for functional orthologs of major clinical interest further underscores the importance of ortholog screens for compound profiling early in lead development.
Why you should use the Multiscreen™-Ortholog Panel in your next campaign 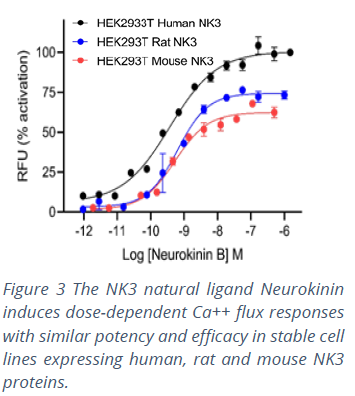 Multiscreen™ is the result of more than 20 years of commitment to the success of screens targeting GPCRs. The ability to make valid and meaningful decisions based on compound profiling assays across orthologs reflects Multispan’s stringent quality control in the development and use of its assays. Each GPCR target is expressed in a single, stable clonal cell line selected for responses to the receptor’s native ligand. Cell lines are constructed from the same parental cell lines using the same expression vectors. Ortholog clones are selected with similar pharmacological profiles using functional assays to validate receptor expression levels and their stability over multiple passages. Multiscreen™ cell lines therefore make it possible to establish, optimize and validate robust assay and quality control protocols for each GPCR target. This ensures that researchers can make ‘apples-to-apples’ comparisons across ortholog screens (Figure 3), thus improving decision making and reducing translational uncertainty during lead generation.
Questions? email Us info@multispaninc.com

Multispan’s panel of GPCR orthologs can enable critical assessment of species-specific variations in target binding activity and modulation of GPCR signaling that could impact in vivo efficacy in small and large animal models.