Blocking viral entry into host cells using antibodies and small molecules has been an effective antiviral strategy. Specifically to SARs, the spike proteins expressed on the surface of SARS-CoV and SARS-CoV-2 bind to angiotensin-converting enzyme 2 (ACE2) on the host cell surface. They are primed by serine protease TMPRSS2 which inturn induces the viral entry into host cells. To develop therapeutic agents that can block SARS-CoV-2 viral entry, it is essential to measure their effectiveness in interfering protein-protein interaction or protease enzymatic activity. To screen for and optimize compounds with these properties, Multispan created a SARS-CoV-2 pseudo-viral entry assay in vitro. The system is in high throughput format that can be conducted in any standard Biosafety Level 1 (BSL1) lab. 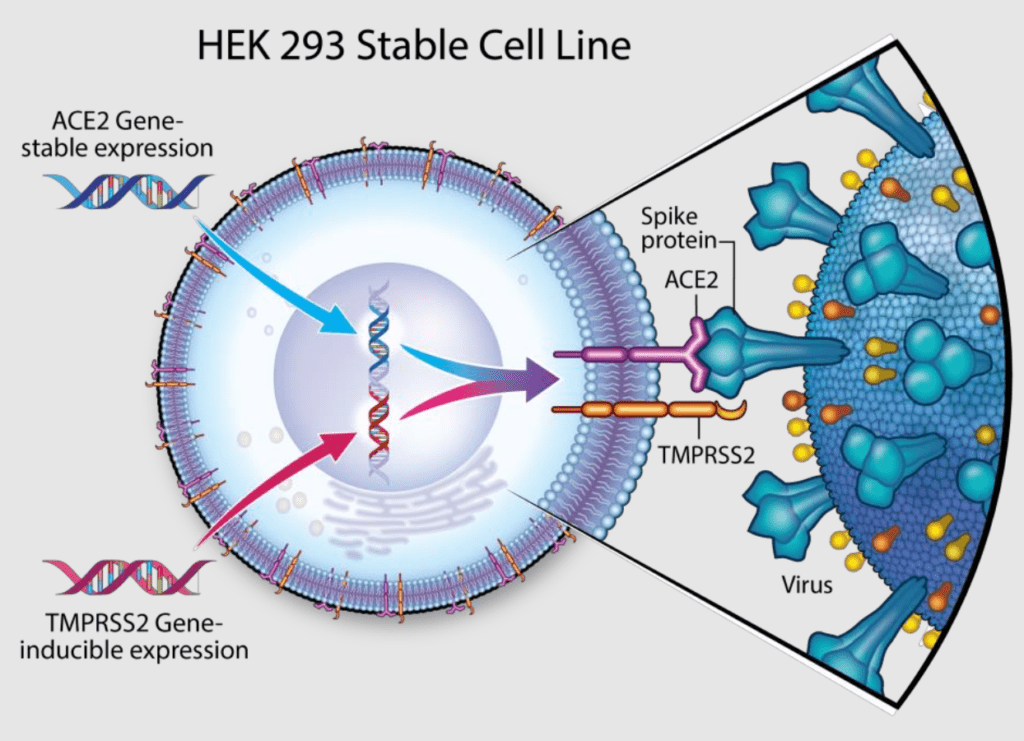 To recreate a recombinant cell line that can mimic lung epithelial cells, we co-expressed ACE2 and TMPRSS2 proteins stably on HEK293T cells and selected stable single cell clones that can be inhibited by known ACE2 and TMPRSS2 enzyme inhibitors. We used SARS-CoV-2-Spike pseudotyped lentivirus to induce robust luciferase reporter activity to mimic SARS-CoV-2 viral entry and demonstrated that the reporter activity can also be inhibited by ACE2 and TMPRSS2 enzyme inhibitors. This robust and accessible recombinant system can be used to screen for efficacious antiviral drugs against SARS-CoV-2 through rational drug design and library screening of small molecules, nucleic acids, peptides or antibody libraries.

In addition to the fully-characterized SARS-CoV-2 pseudo-viral entry assay, we are conducting research on targeting two critical enzymes involved in the viral replication cycle: RNA-dependent RNA polymerase (RdRp) RdRp and 3-chymotrypsin like protease (3CLPro, also called MPro). Generally speaking, assays measuring enzyme activities are often carried out in cell-free biochemical settings using recombinant enzyme proteins because these assays are easy to develop and conduct. However, without live cells as the actual physiologically relevant environment, compound activities identified in these cell-free assays often do not translate well into in vivo activities in animals or humans. The problem intrinsic to cell-free assays can lead drug discovery programs down the wrong path, costing a significant loss of time and money, delaying in bringing therapeutics to the market for patients.

Cell-based enzymatic assays, on the other hand, provide superior data quality and in vivo translation. To employ cell-based assays upfront, could save years and help patients sooner. Therefore, to target SARS-CoV-2, we are investing in our research in cell-based enzyme assays. Specifically, we are developing cell-based assays to rapidly screen compounds for inhibitory effect against RdRp and 3CLPro enzymes. Cells are engineered to express and assemble functional SARS-CoV-2 RdRp with its specific reporter gene or 3CLPro with its specific protease cleavage substrate. As a result, polymerase and protease inhibitory activities can be readily screened in a high throughput manner using these engineered cells with luminescence or fluorescence readout.